It’s always fun to look ahead and think about what sort of aircraft we might be flying in the future. With the switch to the Western Front, I thought it’d be interesting to speculate on a couple more Collector Planes that we might see.

The development of IL-2: Battle of Bodenplatte has not yet officially begun. The team is currently on holidays as Russia celebrates Orthodox Christmas today and once they are back will surely be working on finishing all of their plans for IL-2: Battle of Kuban. Bodenplatte’s development will stretch through 2018 and probably into the early or mid part of 2019 before they are done.

With Battle of Kuban the team was able to find time to create two additional collector planes (sold at $19.99 USD each): the La-5FN and Bf109G-6. Before that the team previously worked on making the Ju52 flyable and adding the Yak-1B to the series. So what if the team has a bit of time at the end of development to make two more aircraft to help fill out the ranks of aircraft for Battle of Bodenplatte? Let’s speculate!

IL-2: Battle of Bodenplatte is centered around the January 1st, 1945 battle where the bulk of the western front Luftwaffe units participated in a mass raid aimed at destroying Allied air superiority.

The title naturally implies that the battle on the Allied side would be fought by the RAF 2nd Tactical Air Force and the USAAF’s 9th Air Force. Both air forces fought close to the battlefields of the Western Front and both were the subject of the Luftwaffe’s attack on New Year’s Day 1945.

What other aircraft could help fill this set out. Let’s look at some options.

Supermarine swapped the Rolls Royce Merlin engine for the enlarged and more poweful Griffon engine when creating the Spitfire XII and follow up Spitfire XIV. The Griffon was able to produce 2,000 horsepower and propelled the modified Spitfire up to 446 mph.

Equipping several squadrons during the Bodenplatte attack, the Spitfire XIV was a powerful RAF fighter from the late fall of 1944 right through to the end of the war. Fast and retaining a good portion of the agility that was typical of the Spitfire series, the XIV had one of the best climb rates of any fighter of WWII. It was less well behaved than earlier examples as the powerful Griffon engine could sometimes cause ground loops.

Popular, powerful, and a fan favourite, I’d give the Spitfire XIV a good chance of being a potential follow up Collector Plane.

The Typhoon, a predecessor to the Tempest Mark V, was one of the most effective close air support attack aircraft employed by the Western Allies. Four 20mm cannon, rockets and bombs were its chief weapons along with the powerful Sabre II engine (also powering the Tempest V) and very good low level speed.

It was slightly slower and less agile than the Tempest but it operated alongside its successor right up to the end of the war.

Though I give it less of a chance of appearing as a Collector Plane, the Typhoon was the bread and butter of the RAF tactical air force through 1943 until the end of the war. At the time of Bodenplatte the Typhoon was heavily engaged in the fighting. It would certainly fill in that gap. 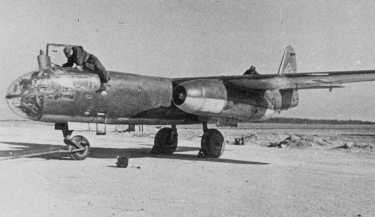 Used in only limited numbers and mostly as a reconnaissance aircraft. Yet, when it was used as a bomber it was difficult to intercept. A 1500kg payload and a 742km/h (461mph)  top speed make this an incredible aircraft. It was used during the late fall of 1944 and into the winter and spring of 1945 and though rare was sometimes spotted and chased by 2nd TAF And 9th AF fighters.

Using the same Jumo 004 engines from the Me262, this aircraft has a shot of making it into the series as a relatively “easy” way to model another bomber for the Axis side. The Blitz had a single pilot and a single station – it would take only as much time to model as a complicated fighter.

Kurt Tank’s successful FockeWulf 190 series of fighters reached its apogee in the Ta152 series. The ultimate high performance piston engined fighters of 1945 were mostly constructed in the guise of the Ta152H1 – a high altitude fighter meant to counter the increasing numbers of Allied heavy bombers attacking Germany.

At high altitudes this fighter was able to reach 759km/h (that’s 472mph) at 12,500 meters with GM-1 boost. It was still fast at lower altitudes although it was less well suited to combat versus other high performing fighters down low.

This isn’t the best option for a Collector Plane in terms of historical usefulness – a limited number of these aircraft flew and most of them were used as top cover for Me262 jets. It does, however, work well from a research and model rebuilding standpoint as a modified FW190 airframe and cockpit would be far less effort than building something new. Collector Planes do tend to at least sometimes follow those restraints.

I have this concept for some additional collector planes that might fit in somewhere at some point either by being developed by the 1CGS team directly or receiving the third party treatment.

A while back I reported that a third party group was developing the Odessa map. Though its been a long time since we’ve heard of any development on the map, we haven’t heard that its a dead project either. Assuming Odessa comes as a possible third party addition, I think it would deserve to have some earlier aircraft types modeled. What would they be? Well I had an idea for two:

In the 1930s, Polikaprov was the premier fighter design studio in the world and both the I-16 and I-15 series of aircraft were incredible successes. At the start of the war and during the Odessa and Moscow battles, the I-153 bi-plane fought valiantly.

Despite its antique bi-plane construction, the I-153 had quite an active wartime record in the first year of the war. It was fast enough to be dangerous and unbelievably agile. This would be a fun aircraft to add to the stable of IL-2’s aircraft list.

Joining the WWII bi-plane stable as a quasi-counterpart of the I-153, Henschel’s Hs123 bi-plane was used as a close air support weapon more in the vein of the Ju87 Stuka or Hs129 or even the mighty IL-2.

Robust and well built, the Hs123 was used briefly during the start of the conflict before being withdrawn and then reintroduced during the Moscow battle. It was still employed in the fighting in 1942 during the Stalingrad battle so this aircraft has a lot of longevity in terms of where it fits in the aircraft set.

Did I miss a type that we dearly need or you find interesting? Send me your thoughts in the comments. There are a ton of aircraft that I could easily suggest but I held back because of realistic limitations – a Ju188 would be interesting to see for example but we know that multi-crew bombers are difficult to model and complex beasts.