This week’s update from 1CGS on the development of IL-2 was a bit of a departure from the norm although it did come with some beautiful shots of the Hs129B-2. 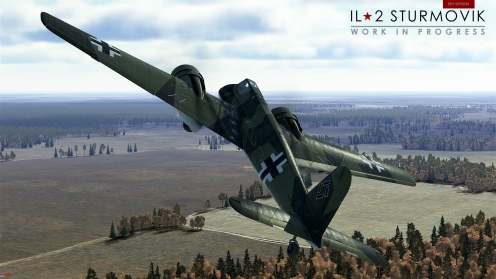 Designed for a similar role as the IL-2 was, the Hs129B-2 is a relatively small aircraft with a heavy hitting punch and some significant armor plating. The pilot sits in an armored bathtub like structure (not that different from modern day A-10s) and there is additional protection and redundancy all throughout the aircraft.

Incredibly small and cramped conditions meant that the reflector gunsight was actually fitted outside of the cockpit on the front nose.

The Hs129 is a dedicated ground attacker and tank killer. The MK101 or MK103 cannon can punch through many tanks side or rear armor. It also comes with various bomb options although the payload is fairly limited.

This plane is a Collector Plane so it will be available for pre-order early access premium players but if you buy Battle of Kuban later using the Standard Edition it won’t be available (unless you buy it separately).

While work on Kuban proceeds basically on schedule, Jason is now thinking ahead to the next title which is the Battle of Midway. In short, Midway will be an extreme challenge for the team featuring new carrier technology as well as featuring aircraft from the Japanese.

Japanese aircraft will be tough to model for the team because many primary sources are in Japanese and translating them requires a translator – tightening an already tight budget.

They also need materials and resources on as much as they can get for aircraft including on engines and other components. The kinds of details go beyond just the basics in order to create a working simulation so the greater the detail the better.

Read the rest of the dev update and don’t hold back if you have vital research on Japanese types.