If you’ll remember back a couple of weeks ago, I had broken the plastic trigger on my VKB Gladiator during a particularly intense dogfight. The replacement trigger has been here for about a week but I haven’t had much of a chance to write about it. While the trigger was broken, I took advantage of the time to fly some different missions: Namely as a bomber pilot. Here are a couple of stories.

But first, the trigger 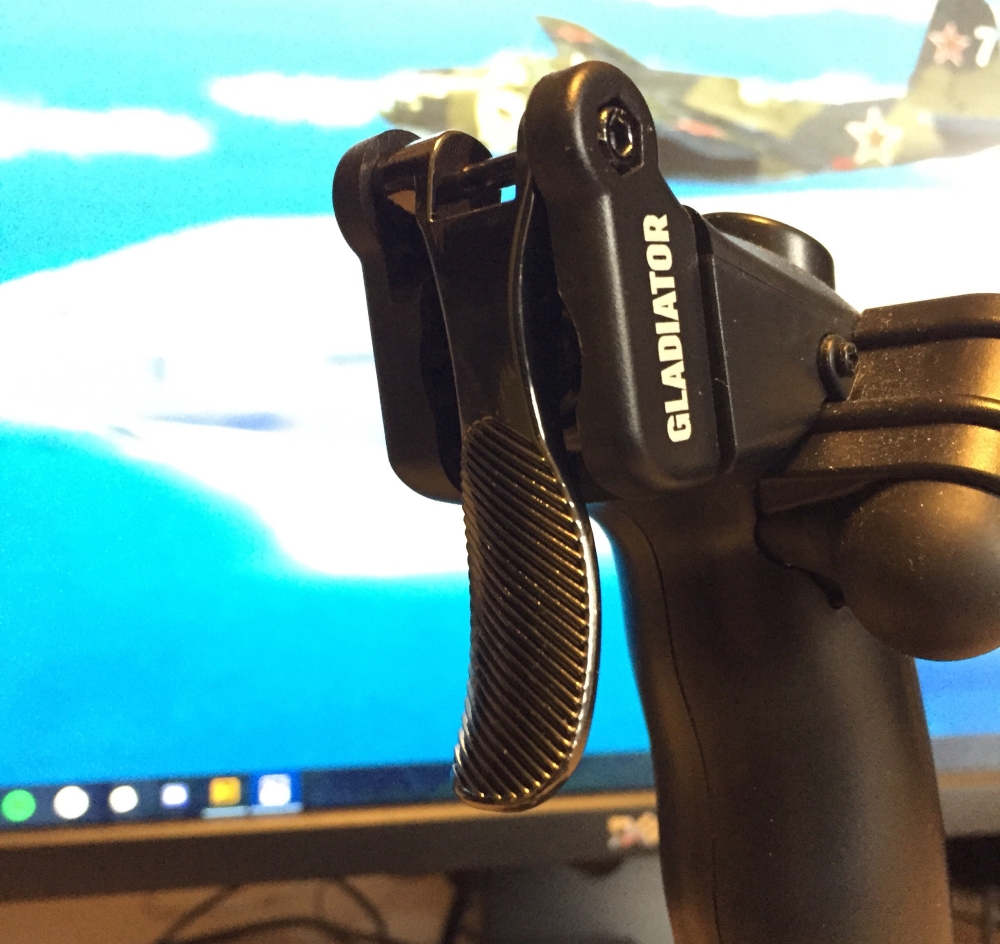 I ordered the $10 USD metal replacement trigger from VKB-Sim North America arriving in Canada in about 5 days.

I like the metal trigger. The magnet on it doesn’t appear to be as able to keep the heavier trigger from bouncing back quite as much as on the lightweight plastic trigger. That aside, its got a good feel and is considerably more solid. Thumbs up from me!

A winter mission near Stalingrad

So what do you do when your trigger is broken? Technically the switch was fine and I could have rebound the trigger to another button but I decided that I would use the opportunity to fly some IL-2 bomber missions in the new Career mode. Most bombers don’t have forward firing guns or you can get away without using them in many situations so this worked out just fine.

The first mission I wanted to recount was with one of the long range aviation units on the Stalingrad Career. This squadron was equipped with the A-20B ‘Boston’ light bomber.

I was initially surprised at the A-20s appearance at Stalingrad but it turns out the the Soviet Union began receiving these aircraft as early as April of 1942 and were definitely in service by the time of Operation Uranus – the backdrop for my first mission with this plane at Stalingrad.

The mission was a long range strike against a strategic bridge target. Flying for about 80 kilometers to target, my A-20 unit pressed on despite about 7/10th clouds at multiple layers.

Sidebar here for a moment. IL-2’s multi-layer clouds are awesome. They look spectacular and I can’t get enough of them. They appear only rarely but when they do, they look great. So far as I know, there can only be two different layers but that’s enough to give the clouds a kind of stacked look that lets you fly clearly between an upper and lower level. They add depth to the scenery and influence your tactics – as you’ll see. 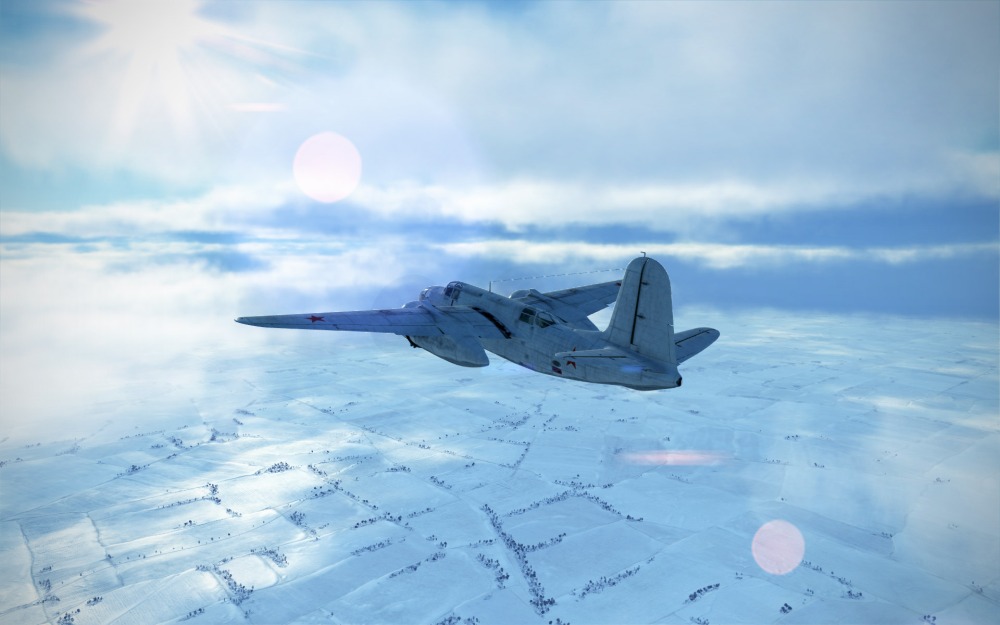 The thicker clouds meant that getting a clear shot at the bridge required some lower level work. I dropped our formation down just under the lower layer of clouds as we approached the target.

At 1000 meters I leveled out and started setting the bombsight. There was considerable sideslip thanks to crosswinds (at 18m/s) so it took some doing to get lined up on target and for the bombsight to be configured appropriately. 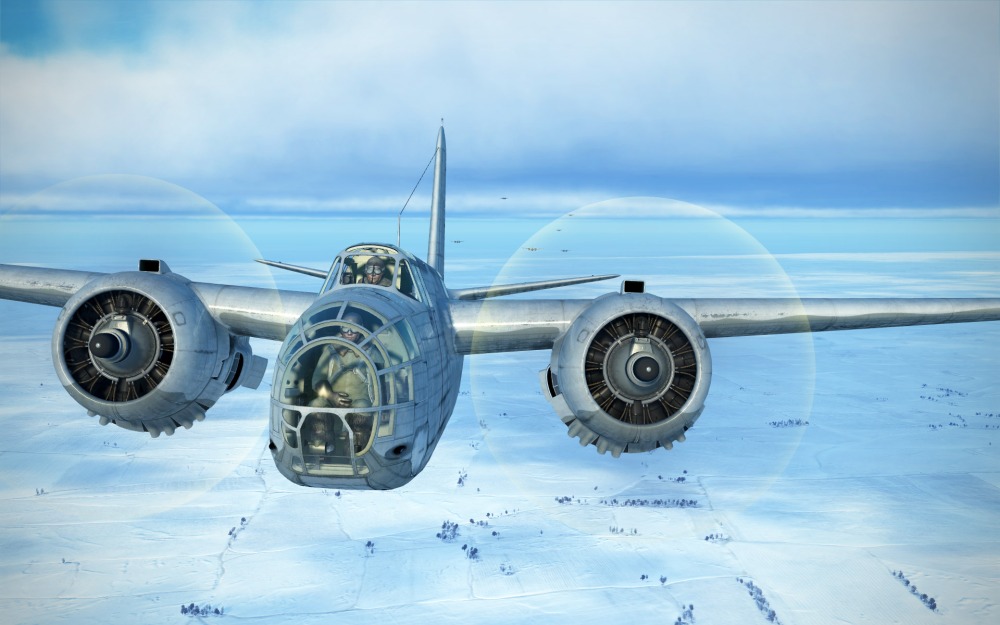 We’re now on approach to target with a clear lock on the target zone (thanks to our dive under the clouds) and all that’s left to do is nervously wait until the bombsight is lined up and then hope that we’ve got this right.

The AI were ordered to drop on my command and that set the stage for what happened next. 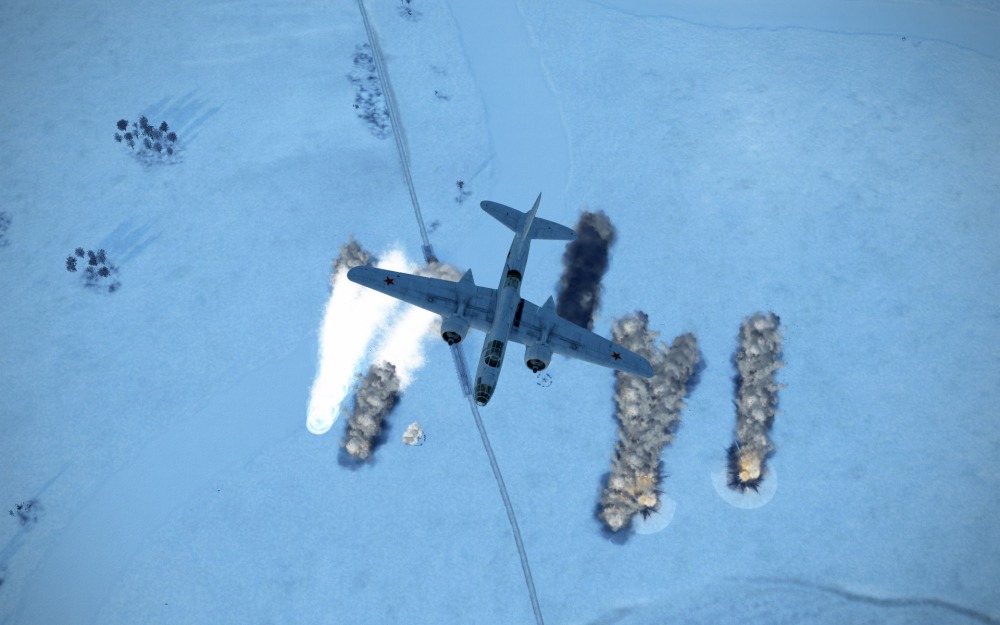 Bombs away as dozens of 100KG bombs impacted the target zone. Many were wide, but a stick of bombs landed on the bridge target causing enough damage to put the bridge out of action. Mission accomplished right? Not quite…

Though taking us under the clouds helped put us on target for the bridge, it also opened us up to low level flak and our A-20B formation was now under heavy fire from the ground. A few dogged Bf109s also tried to get into the formation but our escorts were at least keeping them at bay.

My A-20B took a critical hit on the port-side wing shearing the tip and a considerable portion of the outer wing. The aileron also detached. 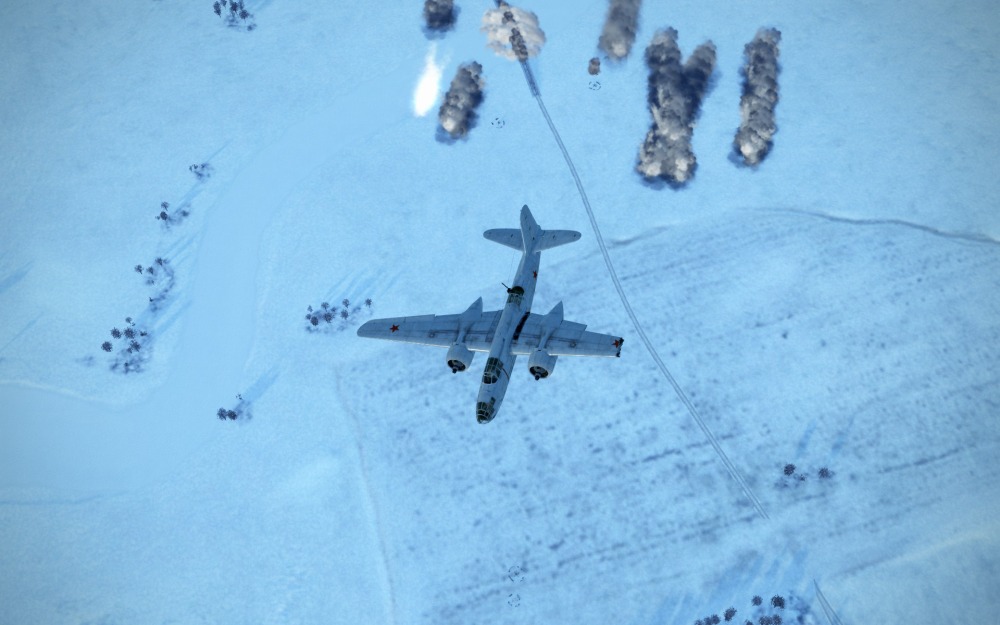 At this point, the light bomber seemed flyable so we turned for home. A couple of other bombers dropped out of formation with damage as well. I was able to turn the A-20 approximately 180 degrees and set course but in trying to keep the aircraft level, things began to get out of hand.

The loss of control on the port side along with part of the wing proved to be too difficult to deal with. The A-20B jerked to the left violently and began to spin.

I ordered a bail-out but it was too late and just as the doors opened…. the A-20 impacted the ground.

My first and last mission with this unit. 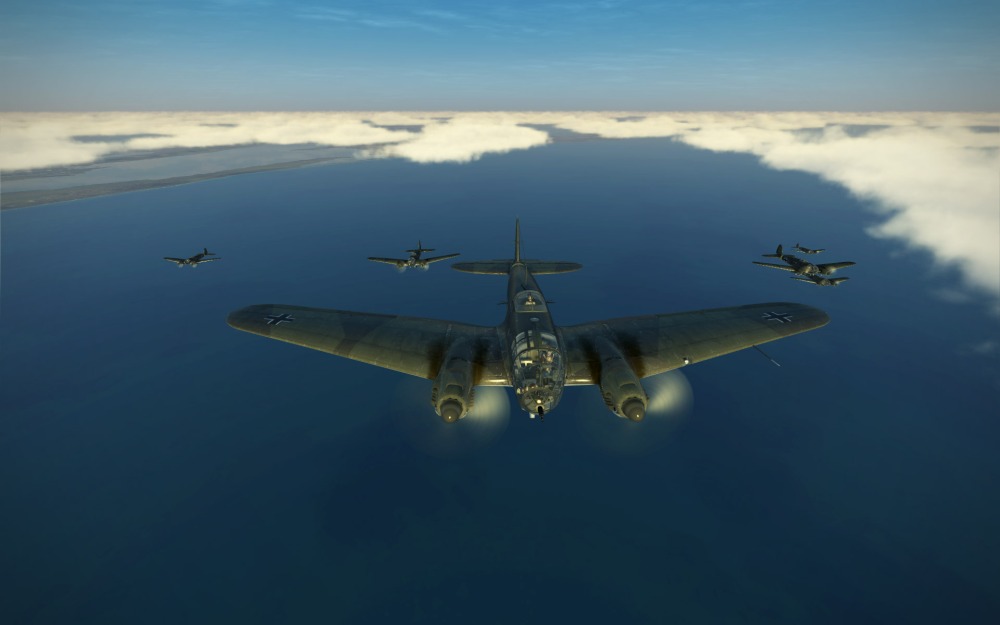 My next mission is something I’ve already talked about a bit before. I assigned myself to III./KG55 during the Kuban battle. My missions took me across the Kerch Strait and into the Kuban area north of Krasnodar.

Just before hitting the Kerch Strait, we picked up our escort: Bf110G-2s! A welcome sight and an interesting option for long range escort. 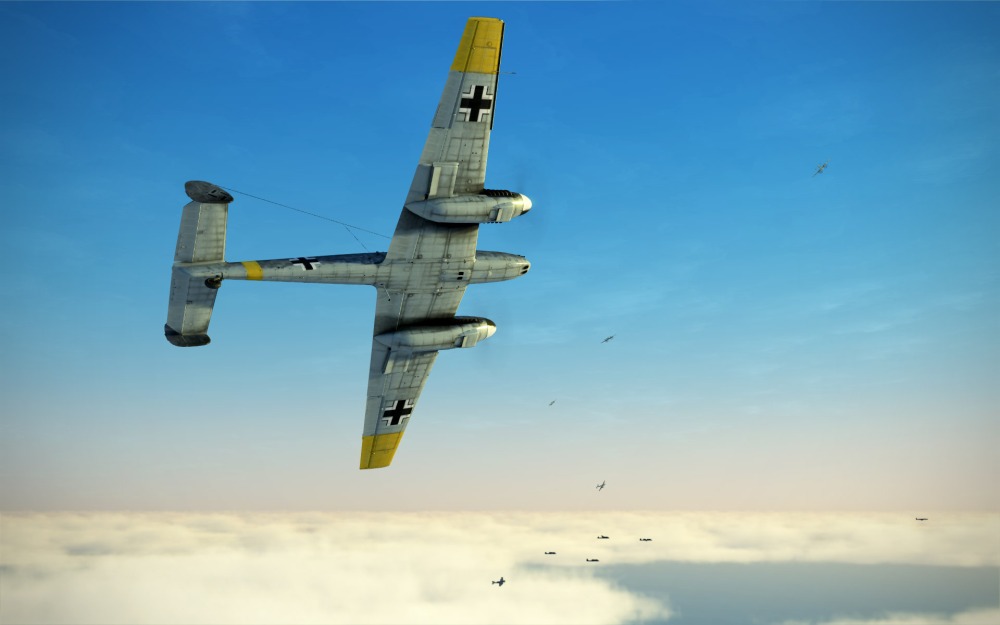 Crossing the strait, we now head directly toward our target. Soon, new dots appear in the distance as enemy fighters are now in our area. Fortunately, they seem less interested in us than they are with the Bf110s and only a single fighter, a P-39, makes a brief attack run on the formation. 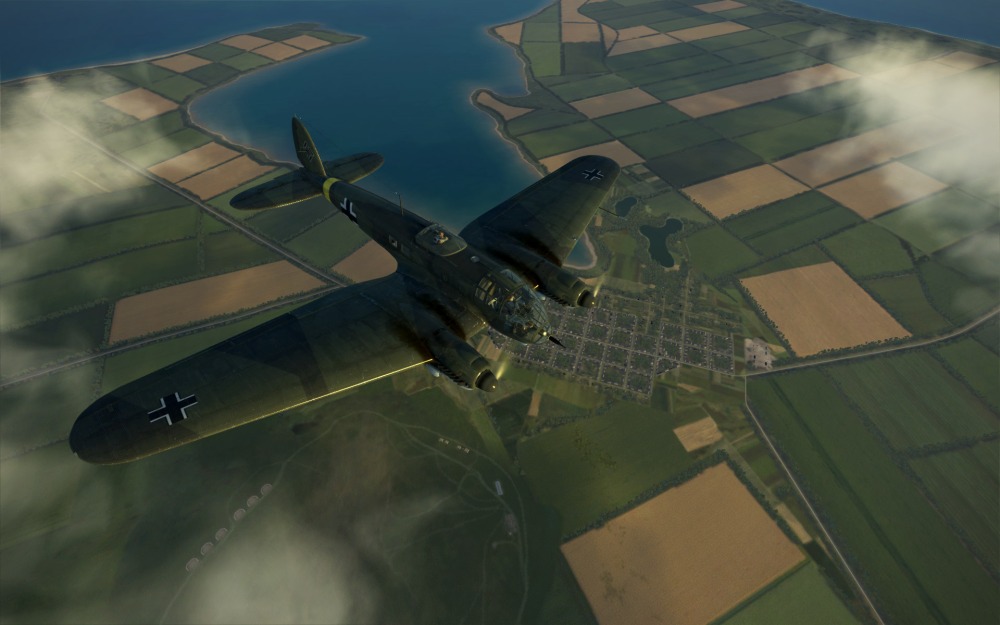 Now we’re closing in at medium altitude on our target. With light winds the corrections are minimal and the formation is still fairly close together. As with the previous mission I talked about, ordering the AI to “Do as I do” or essentially drop on my command makes for some spectacular moments.

With the target lined up, I open the bomb bay doors and release the ordinance. 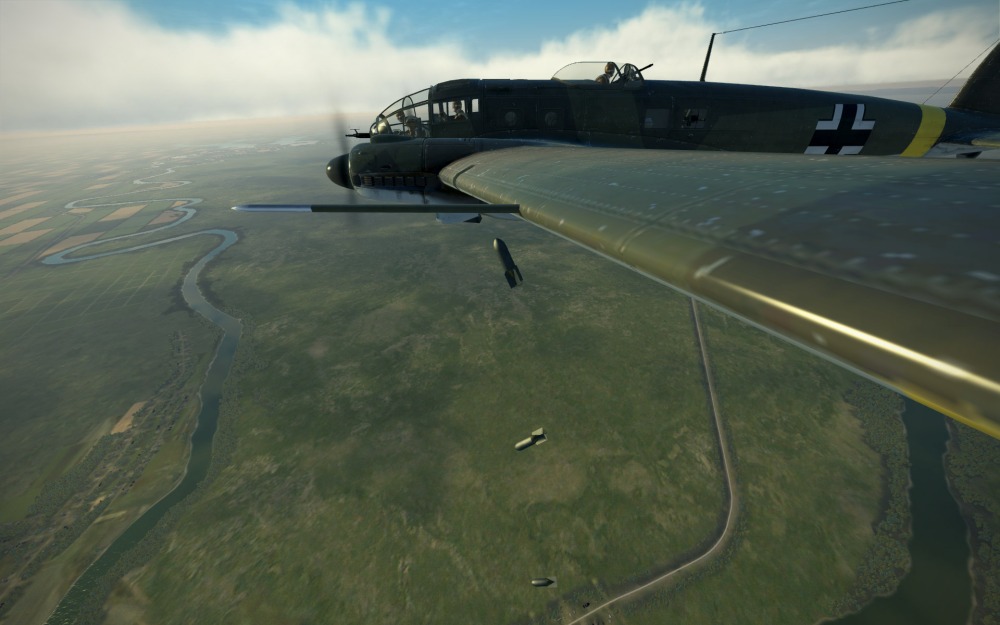 There is an essential ingredient here. You really need to make sure that bombadier (probably you) is on target.

And I was most certainly not.

Despite the light winds I must have calculated the correction wrong or input a variable wrong because the entire squadron, dropped on my command, and then promptly missed the target. 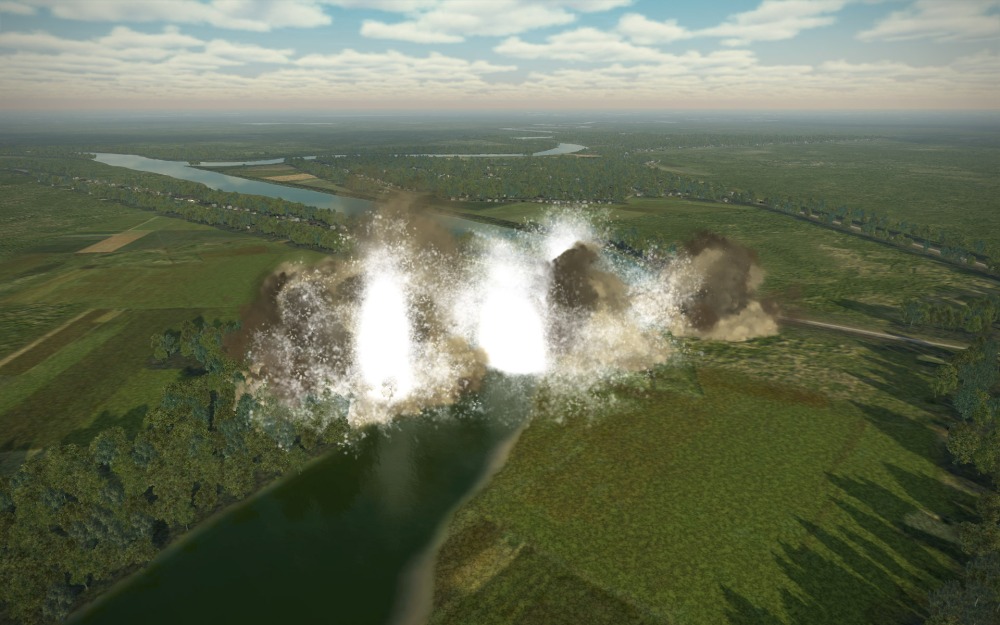 It sure made a heck of a visual with smoke and splashes everywhere but none of the bombs hit their target. That’s a big oops!

With nothing left to do, it was time to head home so I wheeled the formation around and flew approximately 150 kilometers with my formation back to base. A successful mission in that everyone survived but an unsuccessful run at the target. 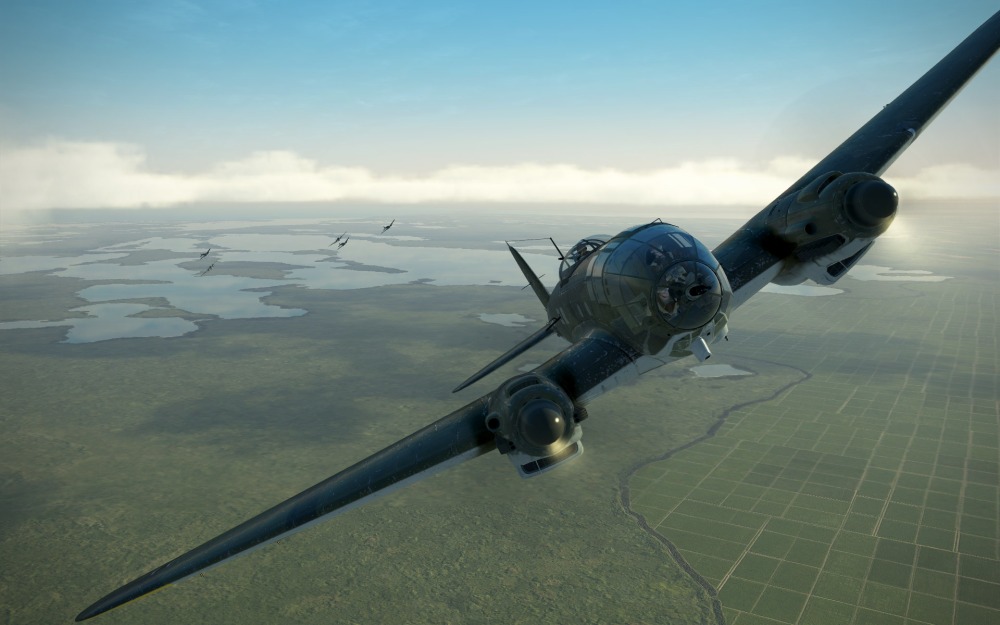 Though there aren’t a huge number of options, I have found the bomber missions I’ve flown to be fairly interesting affairs. These missions benefit from improved mission design compared to the old Campaign mode so you don’t always run into fighters circling the target area and sometimes you don’t run into them at all.

The target areas are fairly obvious with a little pre-planning and map studying and it can be an awful lot of fun to fly these missions. If you like running the whole raid from start to finish then definitely make sure you’re listed as Squadron Leader when you setup the campaign because it gives you that added control.

Or, fly as a member of the formation and spend a lot of time making sure you’re right where you’re supposed to be. Either way, this is a pretty good experience for players interested less in the dogfighting and more in the methodical planning and execution of a World War II bomber raid.