Good reputation and an interesting aircraft

I’ve been keeping an eye on RAZBAM’s AV-8B Harrier module for a while. Their Mirage 2000C module is easily one of my favourite aircraft to fly and the Harrier has been a module that I’ve been watching for a while. One of the things that most appeals to me is the VTOL/VSTOL capability of this aircraft. In practice, I’ve never in a flight sim operated such a jet (the F-35B in Battlefield 3 or 4 is the closest to this) so I wanted the Harrier for the experience.

RAZBAM has a good reputation with their modules and although I know the AV-8B has a few issues, the developers are still working away on solving bugs and adding features until the AV-8B is feature complete. That may not be for a while yet but everything I see feels positive on the whole.

Finally, I’ve played around with the AJS-37 Viggen which is really interesting module, but I wanted a more flexible strike aircraft that was good at CAS and ground support – maybe more than I wanted a fast strike jet and so the AV-8B fit into what I was looking for.

Flying a jump jet is so much fun

The AV-8B is so much fun purely because it is a jump-jet. The VTOL/VSTOL capabilities alone make this a supremely interesting module. Moving the thrust vectoring nozzles around and seeing what the aircraft does is incredibly interesting.

Slowing to a near stop and hovering in the air is exhilarating and requires a ton of practice, patience, and concentration on several different factors at once.

Be it in VTOL mode or flying at maximum speed through a valley, the Harrier is a bit more of a rudder and stick kind of aircraft requiring steady and thoughtful controls in ways that the Mirage and Hornet don’t need. If you screw up, the Harrier will do things you don’t want it to do and I’ve seen it in many videos where pilots don’t use enough rudder to get the Harrier around a turn or through a high angle bank. This is where I think I shine being a WWII era flight sim pilot first. Needing to understand the feel of the aircraft is important here where in other modules you don’t need to worry nearly as much.

Of course, learning to fly such a difficult aircraft to master has resulted in more than the usual number of bad and sometimes fire filled landings. Such as this one.

And this one too… 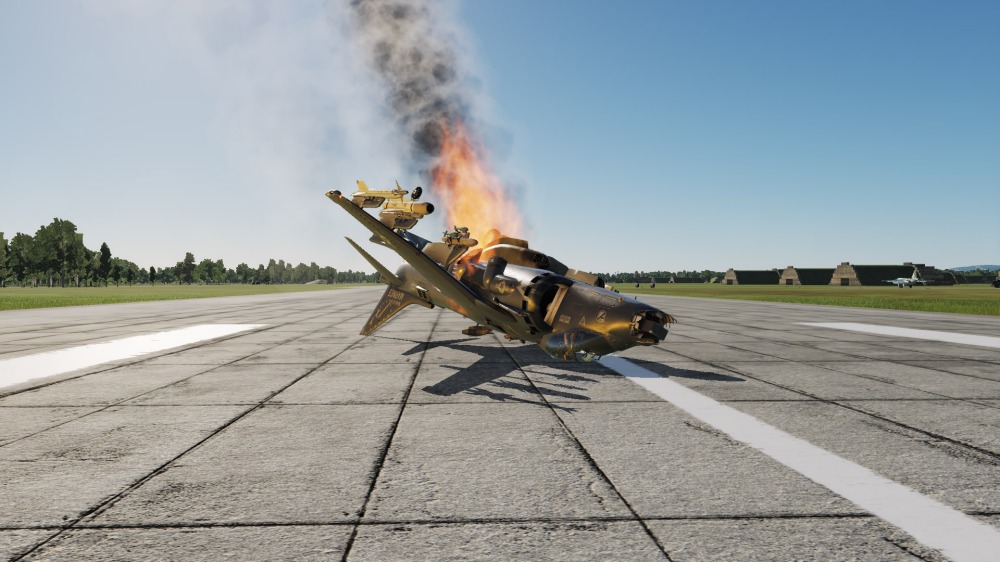 Harrier and Hornet make a heck of a great duo

US Marine Air assets have gone from zero to two in the span of just a few months for DCS and the AV-8B and F/A-18C together make a great pair. Not just as aircraft that are part of the same service but my last few months training on the DCS: F/A-18C module prepared me to jump into the AV-8B with far less of a learning curve than any other module I’ve ever experienced.

The AJS-37 and Mirage 2000C are extremely different jets requiring different approaches to operating nearly every system inside of them. The AV-8B is a unique aircraft, however, I was able to queue up rockets, bombs, and set drop multiples using nearly the same sequence and pressing similar or the same buttons.

It’s not all the same but the learning curve between the two jets for a lot of basic things is the same. So is some of the symbology. This all helps to make transitioning back and forth fairly easy and I appreciate that with each DCS World jet still offering me a fair bit of a challenge and a huge learning curve.

I’m still learning weapon systems and delivery methods on the AV-8B but I have to say that learning how to make things go boom with this jet was relatively easy. Within a few minutes I was able to put rockets, bombs, and the 25mm gun on target with ease.

The biggest difference between the AV-8B with operating against ground targets was the gun. Surprising. I know. But the dispersion, as modeled in DCS right now, is a lot less on the GAU-12 than it is on the M61 Vulcan. Of course the two weapons are meant for different purposes but I don’t think I’ve had as much fun pounding ground targets as I have with the AV-8B so far.

I’m now training on the Maverick and Sidearm missiles which I have yet to make too much progress on – when I do, I’ll have to talk more about that.

Good vibrations, and one bad one

The AV-8B has made great impressions on me overall. The exterior module is beautiful, the VTOL/VSTOL functionality is so much fun, and whenever you view the AV-8B on the exterior you’ll hear that screaming Rolls Royce Pegasus engine.

I have a few disappointments so far. Comparing the AV-8B and F/A-18C modules head to head leads me to see and appreciate the extra artistry that went into the cockpit on the F/A-18C. That isn’t there on the AV-8B – or at least not yet. Hopefully RAZBAM’s artists will be able to catch up and make the AV-8B even closer to that top end experience that the Hornet module offers. I don’t want anyone to think it’s a bad looking cockpit because it isn’t. It has all of the appropriate details in the right places but I’d love to see them take it just one more step towards true greatness.

The other area that I have a bit if a disappointment with is how the jets flies. To be sure, the AV-8B flies great about 99% of the time. Asymmetric loadouts can really be felt and the roll rate is highly dependent on the weight under your wings. I talked about how this is a true stick and rudder jet and I love that about the AV-8B. But it does have a bug right now: If you provoke a spin stall with enough elevator and rudder at the same time, you can convince the jet to do a wacky spinning top impression that you can eventually (with enough rudder and time) convince it to stop. Think Topper Harley’s spinning move during the comedic third act of ‘Hot Shots’ and you’ll have the right image in your head.

It doesn’t look at all like what it should, and I would expect any jet spinning around in this fashion to fall apart and for the pilot to instantly black-out. It happened to me on my first flight testing the limits of the aircraft and I’ve replicated once more since then.

Ultimately, the AV-8B is a pretty solid module with plenty of great features, a great aircraft with plenty of operational flexibility, and a growing list of systems that are complete and working. This is still Early Access and that means that there’s still more to come from RAZBAM on this jet.

The AV-8B needs a splash of polish (and some dust and scratches) in the cockpit and a small review of the flight model. Those issues aside, my first impressions are positive and this is a fun module from RAZBAM that I think I’m going to enjoy quite a lot. 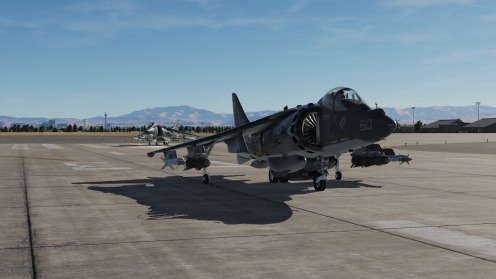 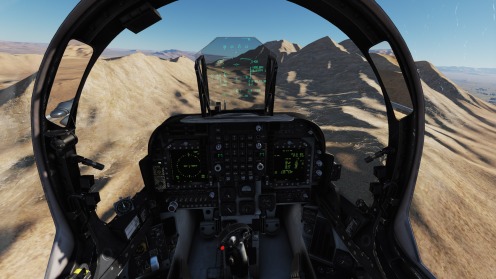 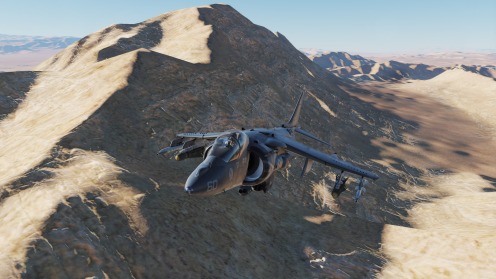 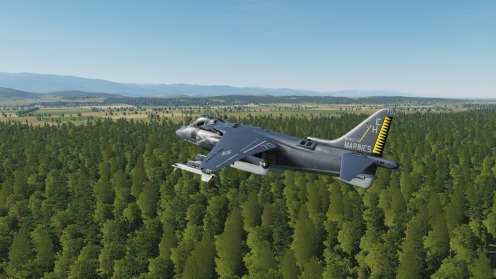 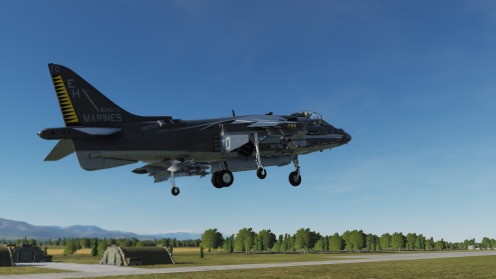 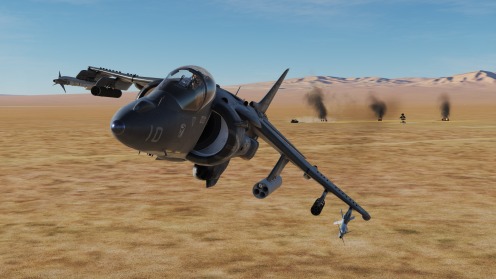 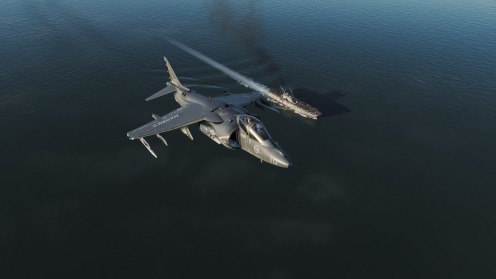 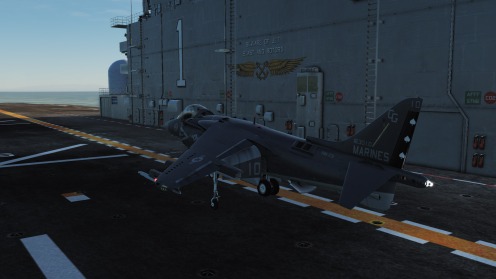