IL-2: Battle of Kuban introduces another member of the IL-2 family, the Model 1943, a variant of the IL-2 that finally lets the series explore the definitive model of of the IL-2 series. This is the titular aircraft of the series and it’s time to do the deep dive on this aircraft – is it better than its 1941 and 1942 predecessors? We’re going to find out!

The Model 1943 gets added engine boost and power at low altitudes improving performance in the altitude range that it works in (namely from sea level to about 1500 meters).

Weaponry is very similar but this version adds the NS-37 cannon which is better than the older Sh-37 at busting tanks.

The Model 1943 also comes with a standard rear gunner station from the factory rather than the slightly awkward field modified gunner station.

The cockpit is also quite different with a mechanical sight replacing the optical sight – a step down in performance except that the bulky mechanical sight was causing injuries during crash landings so it was changed to a simpler model.

In every way the Model 1943 is inferior to the 1942 for stall performance. The increased overall weight of the Model 1943 surely contributes to a higher stall speed. Realistically, its not so high to cause much of an issue.

Increased engine power of the Model 1943 in boost mode (up to 1720 HP) seems to improve the climb performance at sea level but that falls off and is inferior at 3000 meters. Sea level performance for the IL-2 is the most important part of its flight regime while 3000 meters matters very little – what we see here is the IL-2 becoming increasingly suited and specialized to the tactics it was being employed in.

Despite the weight gain and the addition of a standard rear gunner, the IL-2 Model 1943 is faster than the Model 1942 at sea level under both boosted and nominal engine modes while being likely slower at higher altitudes.

Here we see the Model 1943 being marginally slower in turn performance than its predecessor. This is not a huge problem for a ground attack aircraft and in my testing I noticed the difference but it wasn’t a big deal.

Weaponry for every occasion

The IL-2 Model 1943 is a refinement of the IL-2 series and it comes with a lot of weapons options. ShVAK 20mm (250 rounds) cannons and ShKAS 7.92mm (750 rounds) machine guns are the standard forward facing weaponry with a new standard rear gunner station that has a UBT 12.7mm heavy machine gun (150 rounds). Optional VYa 23mm cannons and new NS-37 cannons are also available.

New PTAB bomblets are an option on the Model 1943. These cluster bombs can take out even medium and heavy tanks if employed correctly. They are tricky and will require some practice to use.

The Model 1943 isn’t dramatically faster or slower in the turn but its the qualitative stuff that matter sometimes and the Model 1943 does offer some serious advantages over its predecessor. The chief update is the rear gunner station which, compared to the field modified Model 1942 with a single ShKAS 7.92mm machine gun, causes less of a performance penalty and offers a greater weight of fire from the 12.7mm heavy machine gun.

The mechanical VV-1 sight as well as the white markings on the front of the nose are meant to be used in precision low altitude bombing and rocket attacks. I’m still getting the hang of it but a good guide on this is available in Dev Diary 154.

The engine tuning offering more available horsepower at low altitudes is appreciated and in most circumstances during the IL-2s operation, will be a better option than the engine in the Model 1942 which is geared for slightly higher altitudes. In this case were talking about sea level to 2000 meters or thereabouts – the IL-2 was never meant to fly at higher altitudes.

Overall, this Model 1943 version of the IL-2 is a capable ground attack aircraft. It trades a bit of extra weight and the loss of a couple of rocket rails for a powerful gunner station for self defense while slightly improving its speed at the crucial sea level altitudes.

The biggest strengths of the IL-2 remain: durability, armor plate, and heavy firepower. Added are some specific attributes to make the IL-2 more survivable and more useful in that low altitude attacker role and that’s what we get.

I said it at the beginning but it bears repeating: This is no copy and paste job for the developers. The Model 1943 has dozens of changes and there will be no mistaking the IL-2 on the battlefield. 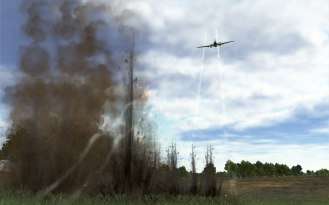 Doing what the IL-2 does best.

Pulling away from a burning vehicle convoy.

The rear gunner position is standard on the IL-2 Model 1943.

This train locomotive is about to have a bad day. 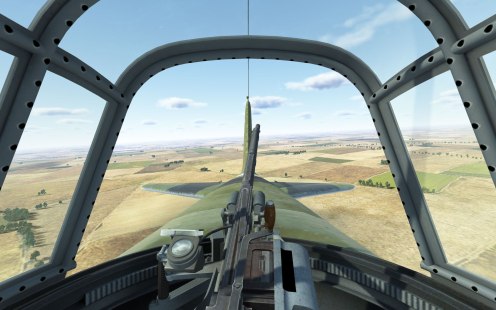 The cockpit and the VV-1 mechanical gunsight.

Climbing away en-route to another target.

Pulling away from an exploding target.