Heatblur is attempting to make the wait for the DCS: F-14 module worth it with their latest developer update detailing the work that they are putting into the module right now to make it ready for early access. The hype for this module has only simmered and is now back in full form. Let’s dig into the details because there’s a lot of them.

Getting the F-14 just right seems to be the MO for Heatblur and they really want to impress out of the gate. Their latest flight model work involves looking at roll behavior and performance coupled with wing position. The F-14s variable geometry wings definitely amp up the complexity and getting the aircraft right in its different forms is important.

They are also working hard on things like drag performance on certain control surfaces (like the elevons) and making sure the turn performance is right. Another area is making sure that the F-14s engines (starting with the F-14B’s F110 and then turning to the P&W TF-30 of the F-14A).

Jester AI, your backseat RIO, is also getting extensive work done including re-recording some of the voice lines and a redesign of their user interface for Jester. Yes, you’ll be able to graphically interact with your backseat AI.

Then there’s the art side of things. We STILL have not seen the final finished exterior to Heartblur’s F-14. But we’re seeing plenty of teases of what the cockpit will look like. The details are extraordinary and it makes this F-14 appear to be highly lived in. See for yourself.

Then there is the big teaser on their website which has a countdown going to October 7. On the 7th, Heatblur are intending to do a big unveiling that involves a live stream and probably the latest on their efforts with the F-14. I don’t want to get people’s hopes up that this means that the F-14 will be launching into early access at this point but it does seem to indicate a new move towards that goal.

Maybe they will surprise us.

The other big news item is that Heatblur is intending to release an AI version of the A-6 Intruder in two variations soon after or alongside the F-14. Both the A-6E and KA-6 (tanker variant) will be released. Heatblur considers the A-6E to be a key piece of their content offering and much has been said about how the two aircraft will be working together in the one of the two campaign’s that they intend to release. 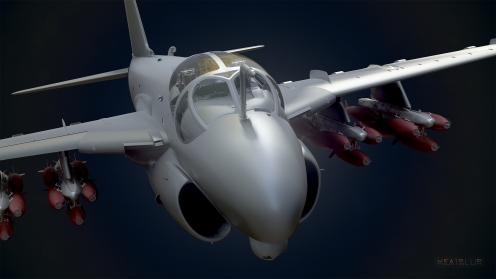 From the comments made today, it also appears that Heatblur is hoping to make the A-6 transition from DCS World AI to DCS World module. Here’s what Cobra said during their update:

The Intruder is an aircraft that has been under active development at Heatblur Simulations for some time, and subject to a license agreement, we hope to eventually introduce it into DCS world as a full, playable module – and we are developing it with this intent in mind.

This is not a bad focus as Heatblur can hopefully finish the F-14 and then introduce one or more other Cold War era aircraft to complement the F-14 and their Forrestal carrier that they are building.

To keep a tally on what is coming with DCS: F-14, here is a list of their planned modules.

Not associated with the F-14, Heatblur is also working on fighter variants of the Viggen (AI) and the Draken as well.

For all of the details, visit the latest update from Heatblur to see what they are up to and check out their cool teaser for the A-6 Intruder.