I’ve been on the lookout for good Scripted Campaigns since the feature debut late last year and I’ve been pleasantly surprised on the whole. Cold Winter was a decent remake of an old favourite and Ten Days of Autumn was an epic opus to the Bf109F-2 at Moscow. So where does “I./JG51 over Velikie Luki” stand in all of this? Read on!

This is a different sort of campaign

Designed originally as a series of single missions long before the Scripted Campaign system was made available, I’m glad that JG4_dingsda from the IL-2 forums was able to modify these missions originally created by Veteranen , it made sense to make this into a Scripted Campaign so there is definitely a continuity between each of the missions.

The mission layout is different than I’m used to. Playing on Normal mode you usually get waypoints and you follow them. This campaign gives you no waypoints and instead you are instructed to fly to a specific location and back again.

It actually works very well and it gives you flexibility in how you approach your mission.

Mission triggers are setup in such a way that things seem to work no matter what your approach is. A welcome change from the odd mission where you might not trigger something and that causes the whole mission to fail – a rare but annoying occurrence. It just doesn’t seem to happen here.

This campaign initially appealed to me for two reasons. First, it was a great opportunity to get to know the FW190 better. I’ve flown it a fair bit but less than the other fighters despite my real appreciation for the type and it being a bit of a specialization for me in the original IL-2.

With its new flight model in place, the FW190A-3 is an incredible aircraft and one well worth mastering. Its relatively easy to fly these days but it still takes a master to make it into the legendary fighter aircraft that it was. Make no mistake, the FW190 is well suited and undoubtedly deadly in this campaign but it will make you fight for it.

Velikie Luki is the second draw here. A third party mod map, this map isn’t one I get to fly over frequently. Though available in the quick mission builder, Velikie Luki has not received official campaign chapters from 1CGS so you can’t fly over it like you can Moscow and Stalingrad.

Velikie Luki was a less known operation during war but it has an interesting history. Known as the “The Little Stalingrad of the North”, the battle shares much with the history of Stalingrad right down to the attempted supply of troops by airlift and ultimately the defeat of German forces in an encirclement and failed breakout attempt.

This campaign opens to the door to this third party map and its history. It’s a wonderfully detailed map with all of the usual villages, towns, roads and forests. It’s also wonderfully detailed around the city of Velikie Luki itself. That’s a good thing too because you’ll be flying over it a lot.

Your base is on a frozen lake which is an interesting difference from the usual airbase. It looks really great!

Missions themselves are somewhat repetitive. I got used to flying from base to the city battle area and I was a little shocked on the couple of rare times where there was even a slight deviation from that. I suspect this is highly realistic for the desperate battle on the ground but a little variety is nice. That’s not to say that it lacks variety. There are different missions and each mission does have at least some of its own unique flavour.

There are plenty of objects moving around during missions although in the first mission I found that there were too many and performance bogged down. Subsequent missions were much smoother fortunately!

The weather in most of these missions ranges from windy and turbulent to more windy and more turbulent to snow and low hanging cloud and fog. This is a challenging set of conditions to work with although I never felt like it was too much.

Some of the missions in this campaign are legitimately challenging pitting you against veteran and ace pilots and frequently leaving you outnumbered. With the four 20mm cannons at your disposal at least you’re never outgunned!

I had to replay several missions more than a few times. It can be frustrating but satisfying once you get the right setup.

Sometimes, loses seemed to have more to do with my bad luck than anything. I lost more than a couple of FW190s in collisions with debris from exploding IL-2s.

Other times, I flew badly. I let an IL-2 tail gunner pepper my fighter all over more than a few times (forgetting these guys carry gunners!). I also stalled my FW190 and a Yak-1 shot me up. Badly! It was a rough go… but your experience may vary! At least some of the difficulty I had was due to my own actions.

Fortunately the FW190 is a tough bird and can take more than a few hits from an attacking Yak!

The campaign does throw you in some tough positions so expect the unexpected!

The bottom line is that this is a difficult and challenging campaign designed more for the expert pilot than someone just starting out. For that expert pilot, flying either Normal or Expert mode, this is immensely satisfying and imminently challenging.

Battle scarred from an encounter with a Yak-1 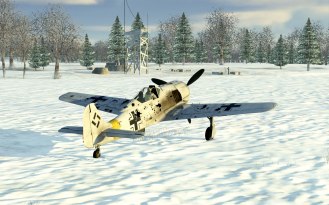 Still made it home in one piece after a rough mission 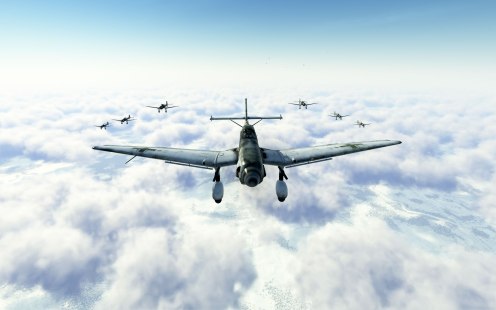 You’re responsible for keeping the skies clear for these Stukas

Heavy cloud but a beautiful sunset 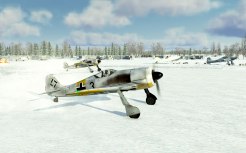 Setting off for another mission from the frozen lake

Above the nasty weather below a deadly dogfight breaks out

These IL-2s are often packing the field modified gun turret!

Landing at the frozen base