Today, Eagle Dynamics announced that DCS: Persian Gulf, the latest map for DCS, is available for pre-order sale. The new Persian Gulf map is a modern combat oriented map using a combination of satellite and art generated textures and objects to fill out 200,000 sq km of map centering on the Strait of Hormuz. 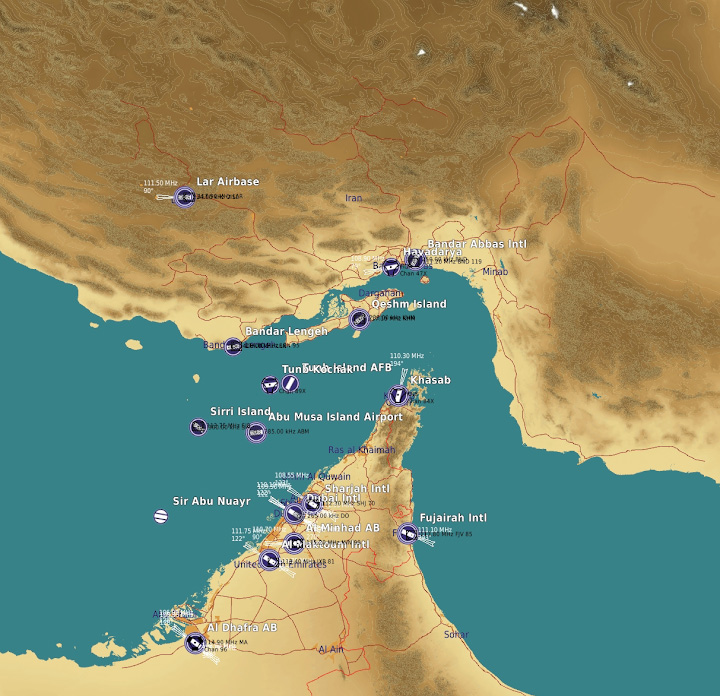 The Persian Gulf Map for DCS World focuses on the Strait of Hormuz, which is the strategic choke point between the oil-rich Persian Gulf and the rest of the world. Flanked by Iran to the North and western-supported UAE and Oman to the south, this has been one of the world’s most dangerous flash points for decades. It was the location of Operation Praying Mantis in 1988 in which the US Navy sank several Iranian naval vessels.

The region also includes the vast Arabian Sea that is well-suited for combat aircraft carrier operations, and it will be an amazing area of operations for the upcoming Hornet and Tomcat. Be it from land bases in Iran, UAE and Oman, or from the deck of an aircraft carrier, the Persian Gulf Map offers a wide array of combat mission scenarios to prove your mettle.

Almost the entire modern aircraft line-up available in DCS could conceivably be used in a Persian Gulf scenario with a focus on Western designs that are popular in the region. You could easily see scenarios covering everything from the F-5, Mirage 2000, AV-8B, F-14 and F/A-18. Not to mention the MiG-29.

The Strait of Hormuz is a strategic choke-point and one of the busiest maritime zones in the world with heavy oil tanker traffic through the strait.

In addition to the strait, there is the Arabian Sea which offers enough open water for carrier operations. In a hypothetical scenario, the ocean offers up useful operations with both the USS Nimitz class and the Admiral Kuznetsov. As Eagle Dynamics is planning another more detailed Nimitz-class carrier for the future, you can see there’s plenty of use for this map.

The map itself features 13 airbases that come complete with approach lights, TACAN, VOR, and VASI lights. A few civilian airfields are also included from what we can see on the map and there are some short distances between some bases that would make for some quick action in multiplayer scenarios.

Glowing Amraam has been busy too with a new pre-order video for DCS: Persian Gulf.

Will this map become popular?

The biggest issue with DCS and its map release structure is that new maps have previously come out but seen little in the way of take-up from multiplayer. At least, that is the charge leveled against them and against this map in the hours since it was announced for pre-order.

My take on things is this: When DCS: Normandy came out, it required a separate install (version 2.0) on a new version of the game engine. I think this made it a little less inviting and accessible and it meant fundamentally deciding if you wanted to play Caucasus 1.5 or Nevada 2.0 in your multiplayer session. You couldn’t decide at that moment.

So too with DCS: Normandy which introduced another new version of the DCS World software package (version 2.2). All of that has changed with the unification of everything under DCS World 2.5 and that is the new environment that DCS: Persian Gulf is emerging into.

There ARE servers with Nevada and Normandy running and some of them even get quite busy too but I’m curious if this new map will have a different uptake. Will DCS World 2.5 be the thing that makes it easier to jump into this new map? Or maybe it’s the modern aircraft scenario that is most popular among DCS fans? Time will tell.

As we’ve learned from the last few Live Streams (the first one is here and the second here) with Matt Wagner from Eagle Dynamics, DCS: Strait of Hormuz was the original name of the map but it was changed to DCS: Persian Gulf for two primary reasons.

First, the Strait of Hormuz is not a name that is particularly well known, and in some target markets people were unaware of where this was or what its significance is from a geopolitical standpoint. The Persian Gulf on the other hand is far more recognizable.

Second, Eagle Dynamics has plans to at least potentially extend the scale of the map to the north and to the west. This would open up more of the Persian Gulf and would make the name of the map inaccurate.

Even with the map coming out in what looks to be about 6-8 weeks time, this does not appear to be the end of development on this map as it could easily expand over time.

If you’re ready to jump in and pre-order the DCS: Persian Gulf map, its currently available for pre-order sale with a $10 discount and with $10 of bonus dollars that you can put towards a future module.

If you’re ready to jump in then head over to Eagle Dynamics DCS e-Store and pre-purchase away. The pre-purchase period is expected to end at the end of May 2018 (in-case you were wondering what year ;)) and that is likely to be when the map itself becomes available for public release.